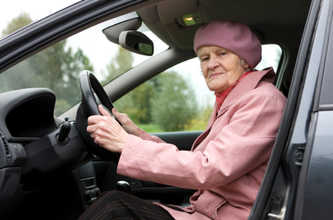 By Judi Hasson | for CarInsurance.com

No one rings a bell when it’s time to stop driving. But the car insurance rates that plummeted when you turned 25 begin to rise again about the time you sign up for Medicare.

You have a few fender benders, or even total your car.

Your family begins to hide the keys.

“There’s no perfect way. None of these ways are absolute. Family will get involved to get the keys away,” says Dr. David Carr, neurology professor at Washington University Medical School. “Just because your father loses his license doesn’t mean he’ll stop driving.”

You resist all hints. You don’t want to lose your independence or your wheels. Anyway, you have no idea how to stop driving.

Do you have to notify your motor vehicle department or your insurance agent? Do you keep your driver’s license for ID purposes? Can you keep your car but not your license?

The big risk in the slow lane

Senior drivers don’t drive very many miles or rack up very many speeding tickets, but they are involved in accidents at a rate that rivals teenagers, according to the National Highway Traffic Safety Administration.

A senior may get away with one accident and avoid a hike in insurance premiums, but that’s their only pass, says Penny Gusner, consumer analyst for CarInsurance.com.

“If the senior driver has too many accidents within a short period of time (three within three years for instance), their insurer likely will drop them or non-renew them because they are too much of a risk now,” she says.

Your state may drop a big hint, too.

Some won’t allow drivers over 80 to renew their licenses by mail or online. In Florida, drivers over age 80 must pass vision and hearing tests before a license is renewed. In Missouri, doctors are granted civil immunity for reporting patients to the state’s DMV who should be retested. (See the Insurance Institute for Highway Safety’s chart of state requirements for older drivers.)

“Maybe your loved one is going too fast, too slow, blowing through stop signs,” Lee says. “Walk around their car to see if there are any scrapes. Look at the mailbox on their property to see if they are hitting it. Are other drivers honking at your father more frequently? Does he get lost or confused when driving?”

Some people recognize the problem, realizing that they can’t drive at night anymore because their eyesight is getting worse. They’re missing turns and having a few near misses. So they voluntarily give up driving.

Others dig in their heels, refusing to recognize a problem.

“I’ve never met an older driver who didn’t think he or she was a good driver,” says Matt Gurwell, founder of Keeping Us Safe, a company that provides services for older drivers.

“The heroes among us recognize their skills have diminished, and they are becoming a hazard on the road and stop driving,” says Gurwell, an Ohio state trooper for 20 years.

Come up with a plan before you stop driving

There’s no single way to stop driving, but there certainly is a wrong way, says David Eby, research professor at the University of Michigan’s Transportation Research Institute.

“If there’s a crash and then a driver makes a decision to stop driving, that is too late,” he says.

Consider how you use your car and how you will replace it. You will still need to get to the supermarket and the doctor’s office, and you may occasionally need identification.

When you surrender your license, your state’s motor vehicle department can issue a state ID card just as good as a driver’s license to board a flight, cash a check or get a senior ticket at the movie theater.

A strong network of volunteers or free transportation services for the elderly and disabled may meet your needs for transportation. Your relationships with your friends and relatives may be good enough to ask for a ride on a regular basis. You may have a neighbor willing to drive you there in your own car.

When you know how you’ll be getting from Point A to Point B, you’re ready to make the decision about what to do with your car — and your car insurance.

What will you do with your car?

If you decide to give up your license but keep your car, you can still maintain insurance. “You would still be listed as the owner and the payee,” Gusner says, “but then you would have to list someone else as the primary driver.”

That is the person whose driving record would be used to set your rates.

If you decide to keep the car but store it, you would turn in your license plates to the state and reduce your car insurance coverage. Many companies offer a storage-only discount that would cover the car if natural disasters or other non-collision mishap damaged it.

If you decide to stop driving and sell your car, you would turn in your plates and cancel the policy for a refund of the unused premiums.

If you do not own a car but instead are listed on someone else’s policy, remind the car owner to contact his or her insurance company. Many insurance companies set their rates based on the driving records of all licensed drivers in a household, Gusner says, and they won’t know to remove you from the policy after you turn in your license unless notified. Some insurers may require that you be specifically excluded from coverage.

If you want to give up your car but keep your license, consider a non-owners policy that will ease car rentals and preserve your coverage without a costly gap if you ever want to insure another car.