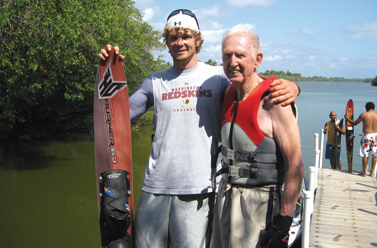 Al Weaver was unhappy with his living situation, but he didn’t know what to do. A widower with Parkinson’s disease, Al was staying at an independent-living facility in Silver Spring, Md., and he didn’t like it one bit. He tried visiting his daughters, spending a week with one, then the other. It was difficult because they were working, and he was alone most of the day.

In April 2012, Al’s grandson, Corey Vaughn, a professional water skier and coach, stepped forward to help. “Granddad living with me is a very natural fit,” says Corey, 27. “He showered my life with love and the gift of his time and energy, and to get the chance to return that favor even a fraction has been a blessing.”

These days are slow and sweet for Al and Corey. Al, 83, spends the spring, summer and fall at Corey’s water skiing school, Peace Love & Water Skiing, in Bumpass, Va., about an hour from Richmond. Corey instructs about 70 students a year.

They live in an old farmhouse next to a lake. Usually, Al uses a riding lawn mower to get down the hill to the lake or Corey drives him to the dock to watch the classes. “Everyone is younger than me,” Al says, laughing. “It makes me feel younger to watch the lessons.” Al retired from a management job at NASA in 1988.

Al and Corey’s lifestyle may be a bit unusual, but the living arrangement is becoming more common as families look for solutions to care for aging relatives. Gail Hunt, president of the National Alliance for Caregiving, says family members are taking on a greater caregiving role because “people are just living longer,” and seniors want to avoid institutional care. A 2009 survey by the alliance estimated that 18% of caregivers are between 18 and 34, like Corey.

Corey was in Mexico working at a resort when his grandmother, who had Alzheimer’s disease, died in 2011. He came home to take care of his grandfather.

On a typical day, Corey makes their meals and helps Al get dressed, and provides assistance for bathing and other personal hygiene. “Moving at an 83-year-old’s pace can have its challenges and limitations, but what in life doesn’t present challenges?” Corey says.

For Al, it’s a life without hassles or loneliness and precious time to spend with Corey, one of his ten grandchildren. His grandson takes him to the barber shop for a haircut, to the movies for fun or to hang out with new friends and Corey’s students. In 2012, Al and Corey were on the road for 50 days when Corey skied competitively and coached. Corey “really pushes me, and it works out well,” Al says. “He makes me do things I wouldn’t ordinarily do when I exercise.”

Corey coaxed Al to try one of his lifelong passions again—water skiing. Al had taught his entire family to water ski when they were kids and has skied most of his life. “I skied for the first time in seven years when I was in Acapulco. That was a lot of fun,” Al says.

Kathy Cannon, one of Al’s daughters and Corey’s aunt, says the arrangement is good for the family and for her father. “When you have a person who struggles with Parkinson’s and has trouble walking around, it’s pretty amazing to get him up on water skis,” she says.

Corey’s girlfriend, Amelia, accompanied the pair on a ski trip to Costa Rica and often spends time with Granddad. “She obviously contributes to the normalcy of my life,” Corey says.

Corey says that only family members care for his grandfather. Relatives step in to give Corey time off. Al contributes to household expenses and pays for his own personal costs.

Both men love the arrangement. “Corey is a joy to live with,” Al says. And Corey has an answer to anyone who wants to know why a guy in his twenties is hanging out with his grandfather. “I would rather spend most of my waking hours making memories with this guy that I love,” he says, even if it means “occasionally losing out on the opportunity to do normal 27-year-old stuff.”